A timeless classic that has been heralded by golf publications from around the world. A course that is an enduring test for the club player and is always fun regardless of how many times you’ve taken the challenge.

A tournament venue where history was made.

Deer Ridge is the rare combination of all of these elements. Crafted by Canada’s legendary Thomas McBroom, a designer known for his indelible golfing concepts that have resonated with players the world over, Deer Ridge is unlike any other creation in the architect’s canon.

Rated at #31 in Ontario by Fairways Magazine, #32 in Canada by the Globe and Mail, and #63 in the country by SCOREGolf, it is one of the most recognized private golf clubs that McBroom has developed over a long and prestigious career.

“Deer Ridge is a private venue for those that want to fit in a game during the week or steal away to entertain clients without having to worry about a tee time,” writes the Top100GolfCourses website, while others have called the course a “masterpiece,” recognizing it as “one of the finer courses in the province.” 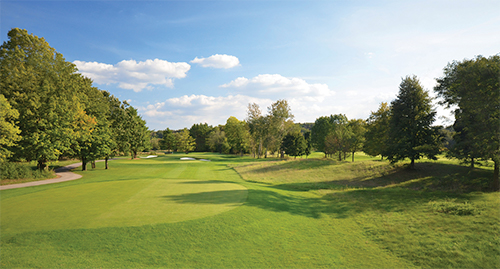 While having a designer say one of his creations is his best is like choosing a favorite child in a family, he admits that there are holes on the course that resonate with him two decades after crafting its fairways and greens, picking the 12th hole as one of his highlights.

“There is a great risk-reward element to this hole as well, where one is forced to make decisions on both the tee, and on the second shot, to set up the best approach,” McBroom says. “There are many different ways to play the hole, which I think makes for a strong and interesting design.”

That’s what makes Deer Ridge such a stunning success—there’s no singular way to play it regardless of ability. It also became a part of Canadian golfing lore when Canadian professional Brian Hadley shot 59 in the Ontario Assistants Championship in 2013, an incredible accomplishment in tournament conditions.

Hadley described his remarkable score as “fun,” and that’s a great way to describe Deer Ridge. Picturesque, with holes running along the Grand River, and a fine walking course, Deer Ridge seeks your creativity as a golfer, regardless of ability, and rewards you with memories to last a lifetime.

To be the best you have to keep progressing forward. That’s why in recent years Deer Ridge has undertaken some significant improvements, regrassing all of its greens, reconstructing bunkers and crafting a world-class short game facility. That means the course is always in top condition and you’ll never miss a day on the course—from sunny spring days where you’re trying to shake the rust off your game, or the rustic fall outings you sneak in before putting the clubs away.

That’s what Deer Ridge is about. Experience the Difference.